“Point the camera to her—she jumps. And she liked to jump; that movement, that energy. I think that feels like that part of her showed a lot in that picture … I can see some of the expression like, ‘oh, that’s where it comes from,’ … but somehow The Flying Surfer … I think that I never really saw that. I feel that it came directly from her, and I think maybe that’s why I like it so much.” -Keiji Iwai

Bennett’s technical savvy and attention to detail made her an expert printer. Bennett would spend hours in her studio reprinting her photographs until she got what she felt was the perfect print. She spent her nights dodging and burning her prints in the dark room, a process wherein the printer specifically selects parts of the image to lighten (burn) or darken (dodge). Bennett would make extensive notes on her prints to ensure that she had the correct exposure for each part of the image. The Flying Surfer was one of Bennett’s most popular images, being leased by companies such as IBM.

Bennett’s dark room was located in downtown Flagstaff in part of the Babbitt building. She could often be found there working well into the evening to make sure she produced the best photograph possible. 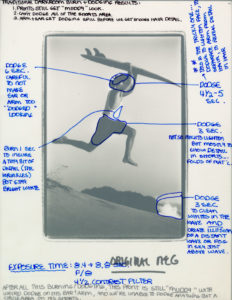 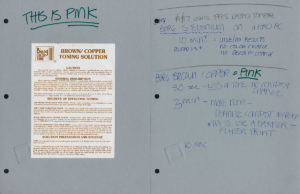