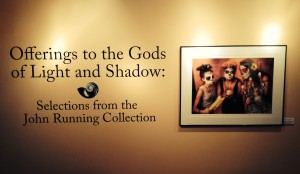 Entry and title of exhibit. The image to the left is of one of John’s favorite models, Bernadette Chavez and her daughters.

The Cline Library and Special Collections and Archives are excited to announce the opening of the John Running exhibit, “Offerings to the Gods of Light and Shadow: Selections from the John Running Collection,” on Monday, October 20, 2014. The exhibit is a retrospective of John Running’s 40 plus year career as a photographer and artist based in Flagstaff, Arizona. 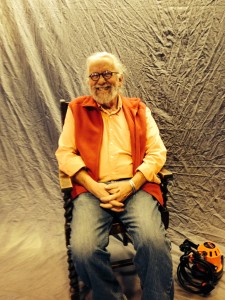 John Running, sitting in the “studio” as the exhibit is being installed.

Cinda Nofziger was the Elizabeth M. and P.T. Reilly Intern who curated the exhibited under the supervision of the Curator for Visual Materials, Jonathan Pringle. Cinda is a graduate student at the University of Michigan’s Information Science program. 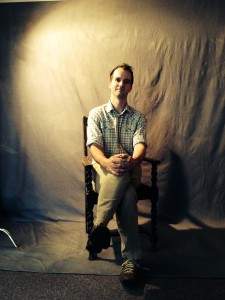 Curator of Visual Materials and Exhibit Supervisor, Jonathan Pringle, sitting for a portrait in the “studio”.

The exhibit highlights John’s photography career and includes selections that touch on his documentary work, portraitures, project-based photographs, and the print making process. The exhibit includes powerful and poignant images of Southwest Native Americans, the Tarahumara of northern Mexico, Palestine in the early 1990s, and several models he worked with over his career.

One compelling aspect of the exhibit is the inclusion of selections from John’s personal journals that correspond with several of the images. This “archival diptych” provides a glimpse into the artist’s mind at the time the photographs were created. It’s rare and exciting to have this type of insight into an artist’s process and life. 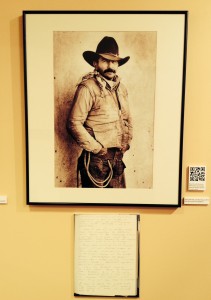 Social media will play an informational and fun role in the exhibit. We added QR codes to many of the images so visitors can learn more about particular images and projects. There’s also a QR code that connects with the virtual version of the exhibit. In an effort to engage visitors, we added a small, functioning  “studio” in the exhibit, where visitors can sit in one of John’s studio chairs and have their image taken. We’re asking that everyone tag their images with #JohnRunningCline. Whether you see the exhibit in person or virtually, we encourage you to “like us” (@NAUCL and @JohnRunning), “follow us” (@NAUClineLibrary and @JohnRunning), or “tag us” (#JohnRunningCline) using your favorite flavor of social media. 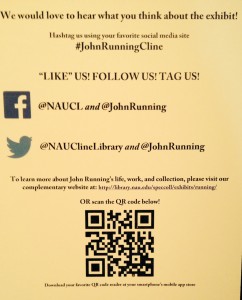 Social Media Handles for the Exhibit and QR Code for the Online Version of the Exhibit.

Links to previous posts about the John Running exhibit by Cinda Nofziger and Jonathan Pringle are available as are additional selections from the John Running collection via our digital archives.

The exhibit will be open to the public from Monday, October 20, 2014 to September 30, 2015 during Special Collections and Archives hours of operation.