There I was, minding my own business, sorting through the Bill Belknap photo collection, looking for representative images of the Grand Canyon to upload to our Historypin profile. I was trying to emphasize Belknap’s great Grand Canyon and river images, and became sort of captivated by the jet-boat Colorado River up-river run story Belknap so thoroughly documented on film. It therefore seemed logical to try a new search: “Belknap boats”. Sure, I found a whole array of images of motorboats, kayaks, inflatables, dories and what have you in the Grand Canyon on the river, but I also found a few real gems- images Belknap took at Lake Mead in 1955 of a boat race. There, among images of hydroplane boats, and the “pits” for the boats was an image of Donald Campbell getting into his Bluebird K7 preparing to try to set a Water Speed Record (WSR) and managing a blistering 216.2 m.p.h. on the lake on that November day. 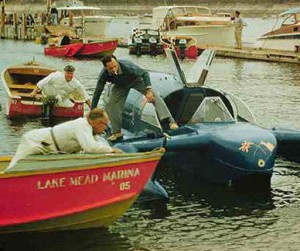 We’re obviously used to finding images of important people and events in our archives, but perhaps not quite of the celebrity caliber of Mr. Campbell. The son of  Land Speed Record (LSR) and WSR holder Sir Malcolm Campbell, Donald Campbell not only tried for and set speed records on water, but also on land (he had gone over 403 m.p.h. in Australia, just shy of American Craig Breedlove’s record of 407 at Bonneville), and in fact his goal was to set both records in the same year- an LSR in a rocket powered Bluebird CN7 and a WSR in a heavily modified Bluebird K7- then retire as the world’s obvious king of speed.

Tragically, Campbell was killed while attempting to go more than 300 m.p.h. on the water at Coniston, Lancashire in early 1967. Between them, the Campbells held nearly a dozen Water and Land Speed Records.

That sort of puts an image of boating on the Colorado River into a whole other perspective, yes?