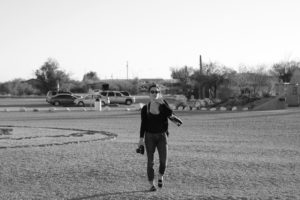 The Cline Library Special Collections and Archives is excited to announce Shannon Sassone as the 2017 Elizabeth M and PT Reilly intern. Some of you may remember Shannon as a Cline Library student assistant a few years ago when she was an undergraduate at NAU. Shannon is now a second-year master’s student in communication and documentary studies, set to graduate later this summer. She has been teaching post production for the creative media and film majors in the School of Communication and was recently awarded the Outstanding Graduate Teaching Assistant for the 2016-2017 school year.  She worked previously as a creative services producer for New 4 Tucson, the NBC affiliate out of Tucson, Arizona for two years following a promotion as a studio production assistant.  Her freelance filmmaking career began immediately upon finishing her undergraduate degree in electronic media and film from NAU and she was fortunate enough to travel extensively with Clubhill Media, a production company based in Washington DC. Shannon has been filming since she was 12 years old and remains passionate about all aspects of the filmmaking process. Her academic and professional career allow her to continually learn and grow and she looks forward to working with the Sue Bennett collection this summer.
As the Elizabeth M and PT Reilly intern, Shannon will work closely with the staff of Special Collections and Archives to develop both a virtual and physical exhibit showcasing the life and work of Sue Bennett, a Flagstaff photographer who was tragically killed in an automobile accident in 2003 at the height of her creative powers. Shannon will interview former friends and colleagues to better understand Sue, her work, and how Sue contributed to and nurtured the photography community of Flagstaff. Shannon will develop the storyline for the exhibits by making selections from Sue’s collection that will convey the arc of Sue’s life and work. This exhibit will be more than just beautiful pictures, Shannon will weave in the voices of Sue’s friends to help tell the story of Sue as a friend, mentor, and photographer. At the end of the summer, Shannon will have completed the virtual exhibit and prepared the physical exhibit to be installed in the fall.