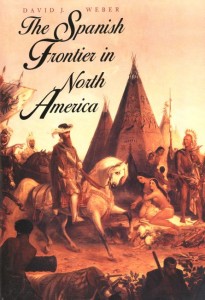 David J. Weber (1940-2010) was one of the premier historians of the Spanish borderlands who taught at Southern Methodist University. I had the honor of meeting him in 2001 as a graduate history student at the University of San Diego. Weber sought to dispel the notion that United States history started entirely with the thirteen English colonies along the Atlantic seaboard. The Spanish Frontier in North America is a narrative of Spanish colonial history from California to Florida between 1513, when explorer Juan Ponce de León landed in Florida, to 1821, when Mexico won independence from Spain and control of the Southwest.

Although this book is a complete history of Spain’s empire in the American Southwest and Southeast, much of it focuses on Spanish relations with Native Americans. For years, the Spanish have been portrayed as uniquely cruel under the “Black Legend.” Instead, Weber argues that Spanish behavior was shaped by the 15th century Reconquista (“reconquest”), when the “pagan” Moors and Jews were driven out of Spain. In the Spanish mission system in the Southwest, Spanish Franciscans exploited Indian labor. However, harsh treatment of Native Americans was not confined to the Spanish; for example, at Jamestown, Virginia the English committed numerous atrocities against Indians. Weber offers an excellent analysis of the causes and events of the Pueblo Revolt in 1680 in New Mexico. After the Spanish restored order in New Mexico they fought together with Pueblo Indians against attacks from Apache and Navajo Indians and other threats.

One of the most interesting aspects of Weber’s book is the discussion of human and environmental transformations of Spain’s presence in North America. Throughout North America the Spanish introduced domestic animals, including sheep in the Southwest. Sheep play an important role in Navajo culture where wool is woven into textiles. Horses completely transformed the Apache, Comanche, and Indians of the Great Plains into powerful societies and brought further ecological changes. Grazing animals transported Old World grasses and the Spanish brought new plants, including watermelon and peach seeds. The presence of the Spanish mission system in California and throughout the Southwest is testimony of the Spanish period.

Many excellent titles have been published about Spanish borderlands history since Weber’s book, including James Brooks’ Captives and Cousins: Slavery, Kinship, and Community in the Southwest Borderlands (2002) and Juliana Barr’s Peace Came in the Form of a Woman: Indians and Spaniards in the Texas Borderlands (2007). (Both titles are available at Cline Library). More scholarship will likely build upon Weber’s fine work.

To read other book reviews by Tom, please visit his blog Reader’s Advice