Somebody posted on Facebook a day or two back asking about where Rimmy Jim’s was on Route 66. In digging through our digital archives, we found that we have some images of places owned and operated by “Rimmy” Jim Giddings that helped to at least put some dates and places to that question. 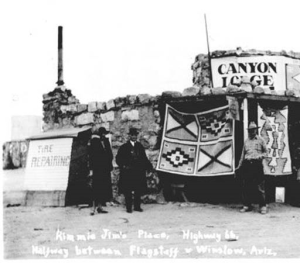 This image depicts a gas station/café tourist shop on the west end of Two Guns (then called a much more tranquil “Canyon Lodge”). The image itself  is from the Arizona Historical Society (Flagstaff) and is image # AHS.0727.00005 . The building is still sort of there, at Two Guns, AZ. Here is a  more modern image (from a different angle): 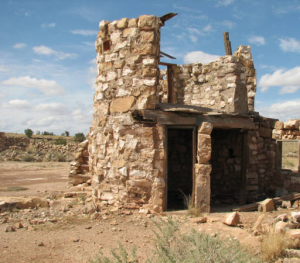 In the background you can see Harry “Indian” Miller’s zoo right on the rim of Diablo Canyon. This is from the Cline Library Digital Archives, photo # NAU.PH.2013.29.13 .

Next up an image from the 1930s, possibly at Meteor Crater Road and Route 66:

Mr. Giddings was notoriously cranky with salesmen who plied their trade on Route 66, as the image shows. This one is image # NAU.PH.252.15 .

Finally, we have the last Rimmy Jim’s, taken in 1969- probably just weeks or months before the place burned spectacularly. Note the very cool Ford Ranchero (is it a GT model?) sitting out front. This Rimmy Jim’s was back at Two Guns, but right along the 1947 alignment of Route 66. By this time, Mr. Giddings was long gone having died in 1943 and buried in Flagstaff, but someone elected to keep the name- and perhaps the reputation.

This image # NAU.PH.85.3.211.202 , and is from the Fronske Studios Collection- used to document businesses that were going to be impacted by the bypassing of Route 66 by the I-40.

For a little more information on Mr. Giddings and life along this stretch of Route 66, please go to the Digital Archives and watch (or read) our two-part oral History with Helen Maben from back in 2012. Part 1 is here and Part 2, here.