Unlike the University of Arizona and the Normal School at Tempe, (both of which were legally established by the Territorial Legislatures of 1885 and 1887 respectively), Northern Arizona Normal School traveled a more circuitous path to establishment.

Beginning in 1893, on April 13th, the 13th Territorial Legislature passed Act 81 “To Establish a Territorial Reform School for Juvenile Offenders and to provide Funds Therefor.” The bill established a Board of Trustees, whose duty it would be to locate appropriate space in Coconino County for the Reform School and to come up with appropriate plans for the buildings and grounds. The board chose a site 1/2 mile south of Flagstaff in Township and Range Section 21. The land would have to be purchased from the railroad, and locally $400 was raised to accomplish that. While there was not high enthusiasm for a Reform School, it was acknowledged that it was “a means to do good” for Flagstaff and the Territory. The Sheriff however, backed the need for such an institution in Coconino County.

In March 1895, the Legislature passed Act 19 “To create a Territorial Board of Control for the Charitable, Penal and Reformatory institutions, and for making an appropriation therefor.” The act essentially removed the former legislative foundation for the Reform School laid in 1893, and presented it to the new agency and board. The act did provide for a means of funding for the Reform School in a tax based upon assessed value within the county. It was however insufficient to complete the building, now well over cost.

In 1895 the University of Arizona formally opened, and in 1896, so did the Normal School at Tempe. 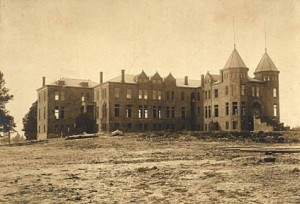 Through 1896, the Reform School remained uncompleted. Gov. Louis Cameron Hughes (and others including the Chancellor of the University of Arizona, and a host of Flagstaff leaders) had the idea that with the arrival of Percival Lowell in Flagstaff, and the wealth of geological wonders (including the Grand Canyon, Sunset Crater and Petrified Forest), that Flagstaff, and perhaps the nascent Reform School could be utilized as the site of a Summer Science School. The idea was popular locally, but there was insufficient time to properly plan, organize and run such a school for the summer of 1896.

In 1897, the 19th Territorial Legislature passed Act 25, “To Establish a Home for the Insane, Near Flagstaff, Coconino County, Arizona“-a branch of the Territorial Insane Asylum in Phoenix in Flagstaff at the unfinished Reform School. The Insane Asylum as an actual institution or concept in Flagstaff was fairly short-lived however, for two reasons. First, there was not the support for it that the Reform School, or the Summer Science School had generated locally, and second; the Insane Asylum Board pointed out that there was a surplus of bed and patient space in the Phoenix asylum already, and that the costs in professional staff to run a second facility in Flagstaff would double their costs of operation.

In 1899 Territorial Governor Nathan Oakes Murphy put it to the 20th Legislature that as the building in Flagstaff remained unfinished and unused as either a Reform School or an Insane Asylum, it was time to either sell the building, or use it to create another Normal School for the territory. As the Legislature had passed a compulsory education bill that session that mandated a high school be established in each county, the Governor’s call was timely. In early 1899, local lawyer E.E. Ellingsworth wrote the bill that would be introduced into the legislature by Representative Henry F. Ashurst as bill 41 “To Establish the Northern Arizona Normal School and Provide for its Maintenance” on February 6, 1899. The bill, modified slightly, was passed on March 4, 1899, and signed into law by Murphy on the 11th. The Normal School Board formally inspected the property and accepted it on March 28th. With the $10,000 funded by the Legislature, the building’s 2nd and 3rd floors were completed, and furnishings acquired. Northern Arizona Normal School was opened September 11th, 1899. 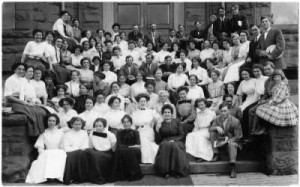 To read more about the founding of Northern Arizona Normal School, see: