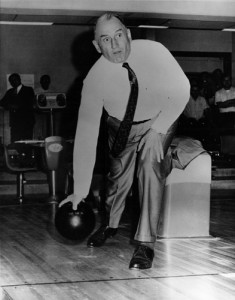 President J. Lawrence Walkup was one of our most active, involved, and energetic university presidents. He served NAU for 30 years (1949-1979), 22 of them as president (1957-1979). According to Platt Cline, author of Mountain Campus- The Story of Northern Arizona University, President Walkup was known as “The Student’s President.” As seen in this photograph, he could “roll” with the best of them.

President Walkup advanced the university in numerous ways during his 22 year tenure as president. Two notable advancements include the extensive expansion of the institution’s physical plant from the historical North Campus through Central Campus and South Campus; the other being the academic evolution of the institution from Arizona State College to Northern Arizona University in 1966. NAU granted its first PhD in 1968.

President Walkup’s papers are housed in the University Archives and contain a wide breadth of issues documenting the  history of the university. The finding aid to his papers can be viewed here as well as an oral history with President Walkup conducted in 1996 with Dr. Monte Poen.