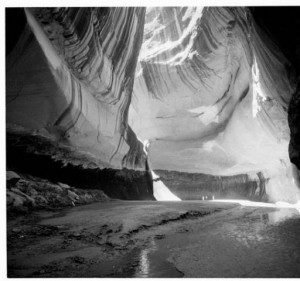 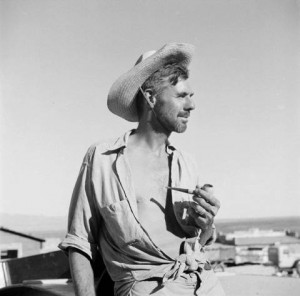 Glen Canyon was a favorite of photographer Tad Nichols, where he shot over four thousand images. From these many images, a book was published by the Museum of New Mexico Press in August of 2000, entitled, “Glen Canyon: Images of a Lost World, Photographs and Recollections,”

Tad was born in Springfield, Ohio, on July 8, 1911. He grew up in Cambridge, Massachusetts until 1930, when due to his asthma, he was sent to Mesa Ranch School in Arizona. In addition to academics, his school experiences there included camping, hiking, and horseback riding. These activities helped Nichols develop a great love of the outdoors.

From fall of 1932 until spring of 1937, he attended the University of Arizona in Tucson. He graduated with a double degree in geology and anthropology. He met Mary Jane Hayden in an astronomy class. They were married in 1937.

Tad’s initial interest in taking pictures was inspired by a university photography class. Later he studied with such noted photographers as Ansel Adams, Edward Weston, and Brett Weston. He traveled with many scientific expeditions, during which he acted as official photographer. This included several trips to Mexico to document the eruptions of Paricutin Volcano, as well as other worldwide trips with geologist and naturalist Edwin McKee. Nichols was also involved in making films. He had gained experience as a cameraman during World War II, while creating training films for the Air Force. Afterwards he made films of his own about the Southwest, and also produced instructional films for the U.S. Indian Service. During the 1950s, Nichols worked for Walt Disney Productions and the Sierra Club.  Tad traveled extensively throughout the world, in such diverse locales as Europe, Africa, the Middle East, Indonesia, Mexico, Central America, South America, Galapagos, Hawaii, Alaska, and the Southwestern United States. Of all these places, Glen Canyon was a favorite.

To check out more of Tad’s beautiful images of Glen Canyon, please click the link below.

Looking for more information about Glen Canyon concerning the development and impact of Glen Canyon Dam, be sure to check out our Glen Canyon Resources Page linked below.