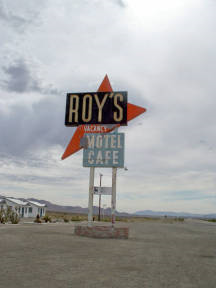 I just returned from Los Angeles. My name is Sean Evans and I am the archivist at the Cline Library Special Collections and Archives. This post will reflect on a driving trip I took with a colleague from the Arizona State Archives to attend the annual 2-day National Park Service Route 66 Archives and Research Collaboration (ARC for short) meeting, held this year in sunny downtown Burbank, CA. Aside from an opportunity to drive many miles of the vintage road between Flagstaff and Los Angeles, the meeting reminded me of the fruitful and unique relationship between the National Park Service and the libraries, archives, and museums from along Route 66 that partner to make the ARC. These institutions are actively collecting, ordering and preserving unique, primary source materials about Route 66, the road, the businesses and communities along the route, but perhaps most of all, about the people of the road. For Special Collections and Archive in the Cline Library at NAU, this relationship was probably destiny. 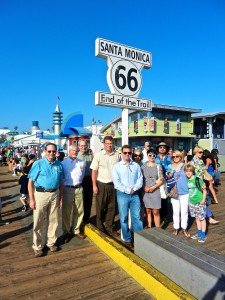 ARC Members with Dan Rice on the Santa Monica Pier- at his “end of the road” kiosk.

Route 66 and NAU grew up alongside each other here in Flagstaff. In 1926 when Route 66 was established, our little Northern Arizona Normal School changed its name to Northern Arizona State Teachers College. Like Route 66 which underwent ongoing changes across Arizona (largely in 1937 and 1947 before the I-40 bypass era of the ‘50s and ‘60s and later), so would NASTC becoming Arizona State Teachers College in 1929, Arizona State College at Flagstaff in 1945, and Northern Arizona University in 1966. Even our former library (the Gammage Library across from Ashurst Auditorium on NAU’s historic north campus) had a back door facing Route 66. It was no surprise that our Special Collections and Archives was ultimately invited to become one of the 10 founding National Park Service ARC libraries for researchers on and of the “Mother Road”, Route 66.

Working with our friends and colleagues at the NPS has allowed us to better understand the whole road and its history. Additionally, the mix of libraries, archives, and museums working within the ARC has certainly made for a richness of resources, ideas, and viewpoints. We’ve worked on a variety of initiatives to promote collections and preservation activities along the road, presented at regional conferences on Route 66 and the ARC and more. Along the way we have helped researchers, authors, and film makers with a variety of Route 66-related projects. I like to think we’ve helped to create a new way of looking at America- a linear way, by looking at the road and its environs as community. 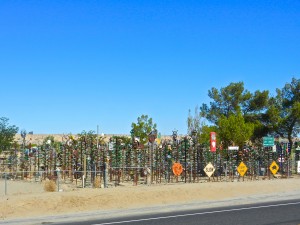 In support of Special Collection’s collecting focus of the Colorado Plateau, and also in support of the ARC, Special Collections has digitized nearly 2000 images of Route 66 in the region from more than 10 different photo collections covering more than 80 years of 66; has acquired more than 180 monograph titles that touch on Route 66; acquired an assortment of historic and contemporary maps and; conducted 13 oral histories. The Cline Library hosted an exhibit on Route 66 (“Route 66 in Arizona: Don’t Forget Winona”) in 2009 that lives on today online. We’ve even put some of our Route 66 images into Historypin.com (see related story in this blog).

L.A. turned out to be a great venue for our formal ARC meeting sessions. They were held in the Autry National Center where their great Route 66 exhibit “Route 66: the Road and the Romance”  recently opened. Needless to say, if you’re down L.A. way, you need to go see the exhibit. They have fantastic material on display to illustrate Route 66. Our sessions also took us to Disney’s Imagineering Archives. All I can say about that place is wow! As an archivist it is even better than actually being at Disneyland!

We’ll keep you posted on Route 66 developments and additions to SCA’s Route 66 collections. The Route 66 International Festival is in Kingman in August, and Flagstaff has its own Route 66 Festival in September. All of these events are bound to bring up photo opportunities, preservation and other issues to explore and document for the future.