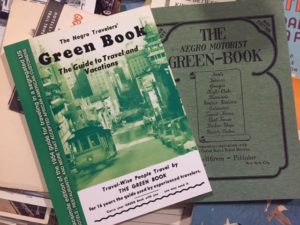 Usually when I sit down at the keyboard to add a story to this blog, the story focuses upon a collection, or the status of an exhibit or it is something vaguely humorous (archival humor, that is). What I present today really falls into a whole other sort of set of categories. I’ll elaborate-

A few years back, we became re-acquainted with a title that in some ways was a relic of a happily lost past- Victor Green’s Negro Motorists’ Green Book (and the subsequent Negro Travelers’ Green Book) through some inquiries made by National Park Service researchers who were looking into the status of historic businesses along Route 66 here in Flagstaff.  The little guide books listed places in cities and towns all across America that would accommodate African American travelers. As Mr. Green stated:  “it has been our idea to give the Negro traveler information that will keep him from running into difficulties, embarrassments and to make his trips more enjoyable.” A very loaded statement given the timeframe in which the Green Book was published and used.

Given Special Collections and Archives’ interest in travel and tourism in the Colorado Plateau region, the Green Book then was a very particular lens through which we could view tourism within the region- and we wanted copies. Unfortunately beyond the very rare and expensive copy or two that slid through E-bay, none could be had at any price we could afford.

You can imagine the collective excitement when while searching for new books for our collection, I ran across a new reprint copy of the 1941 edition on Amazon, put out by About Comics. I decided to e-mail About Comics with a couple of questions- why did they elect to reprint the Green Book (and why 1941?), and could we expect more editions in reprint? My first discovery was that About Comics was really one man, Nat Gertler, and here was his response:

“I think the Green Book is a great thing to have available because its very existence tells a piece of the sad history of America. The fact that in a nation filled with places to stay and to get a meal, the African-American traveler needed to have this sort of list, of places that would accept their money which was as green as anyone else’s, speaks to the problem of the time. When you read a copy of the Green Book, you’re kind of hoping that it would be filled with explanations of why there are such limitations, what’s going on, and angry invective railing against the injustice, but when you see it with its simple listings, ads, and little articles, you realize that it is far fiercer indictment without those things. To expect this book to announce the injustice of it all is like expecting a fish to say “I was swimming, in the water.” The water doesn’t need to be mentioned. The water is everywhere, it is assumed. There was not a single person who bought the Green Book back in 1940 who didn’t know why it was needed; they were just glad to have it available.”

“As to why About Comics, a company that as its name suggests specializes in books of comics and books about comics, is reprinting it: About Comics is a one-man operation, strictly small time and kept that way on purpose. If About Comics is doing anything, it’s me, Nat Gertler, doing it. When I publish something, it’s generally just because I find it interesting, and reckon that if I do, perhaps others will as well. Sometimes I’m wrong. When I first heard about the Green Book, I knew that I wanted to have a copy, and perhaps I was not the only one. This time, I was right.”

“The 1954 edition of the Green Book (by then, its name was changed to The Negro Travelers’ Green Book) should be available within a couple days. I picked that year because it was far enough from the first edition we reprinted, 1940, that the material would have evolved… and also that was the year of Brown v. Board of Education, which was of course a key point (if far from the final one) in curtailing the segregation of America. I may well continue to reprint various volumes if the market shows demand, although I think that for a lot of people simply having one will be enough. There were also similar travel guides for American Jews, and it would be good to bring one of those back in print. Beyond that, I really don’t have any long-term plans for anything. We’ll see where inspiration and suggestions (I’m always open to ideas) take me.”

So, come on by and see these two books that we now have in SCA, they are at the same time historic, and seemingly relevant once again. I will guarantee you’ll never look at travel in our nation quite the same way again.

Thanks, Nat for putting these books into our hands (and the hands of our researchers) again.