The last few months have been a thrilling adventure navigating through the Special Collections and Archives (SCA) holdings at Cline Library. From the time I was young I have enjoyed wandering up and down the aisles of the public or school library locating interesting books to read. Entering into SCA for the first time I was awestruck by the amount of local history preserved in one location. This is when I truly began to comprehend the task ahead of me. I would be combing through archives that compose the history of the Colorado Plateau: The original Kolb Brother’s photographs documenting their Grand Canyon adventures; photos and surveys from Powell’s 1871 river expedition; Glen and Bessie Hyde’s personal photos from their mysterious river trip; more recent river trips and the actual events that have occurred down the Colorado River (complete with photographic proof); Harvey Butchart’s photos, logs and annotated maps; the original James Hanks 1927 photographic documentation of the Glen Canyon region before the dam and Thomas Hanks’ recreation of these photos. I could go on and on. Having this opportunity to go through these personal photos and documents is a fascinating process as they share a story of another individual with a passion for the Colorado Plateau. Having insight behind a specific photo creates a profound perspective which I get to explore while out re-creating the image.

As the research portion of this project started nearing completion and the unpredictable northern Arizona weather became more pleasant, I transitioned my navigation from the archive aisles to the outdoors.

I would like to share some of the triumphs and struggles while currently working on the Hank’s Scholar Re-photography project. The first paragraph describes the very first attempt out in the field photographing a cabin within upper Soap Creek in House Rock Valley.  The second account is of another site near Walnut Creek in Williamson Valley, north of Prescott. My hope is that these accounts give insight and context into the journey leading up to the recreation of the historical image. In the words of the great adventurer and novelist Ernest Hemingway, “It is good to have an end to journey toward; but it is the journey that matters, in the end.” 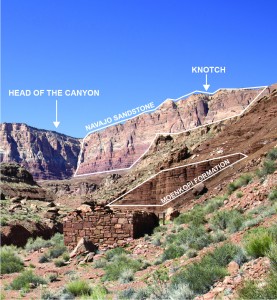 I choose Soap Creek to be my first historic repeat because this photo has a relatively specific location, distinct geologic characteristics in the background and a cabin in the foreground to locate. While driving up highway 89A to where the road crosses the soap creek drainage, I was scanning the upper portion of the Navajo sandstone, which makes up the upper reaches of the Vermillion cliffs. I was looking to match the head of the canyon and a distinct notch in the rock formation with the one in the photo to ensure that the photo was actually in Soap Creek. I did not expect the elation that rushed through my body when I aligned the photo with the exact geologic view in front of me. As I started to hike up the drainage I noticed wet sand, bent vegetation and the smell of sulfur which signified a flash flood had recently flowed through the creek bed. The thought that the cabin may have been destroyed by a flood in the fifty years since the photo was taken had never crossed my mind, until that moment. I continued to hike with uncertain thoughts running through my mind. What if the entire creek bed had been altered and there was nothing left of the cabin or the vegetation within the vicinity of the cabin? Having hiked many drainages in the Grand Canyon I know this is a common occurrence. Normally, I look forward to seeing the aftermath of a flash flood, the new boulders, newly exposed fossils and traversing the newly formed flow path. This realization made me reevaluate the significance of this project and the relevance of documentation because the environment is always changing. (As I would later photographically confirm, the alteration occurs from both natural and human events). Despite the doubt, sun and searing 90 plus degree heat I continued hiking, focusing on the near and distant geology. Heading further up the wash, I noticed the Moenkopi Formation began to appear more prominently at eye level. I knew I had to be getting close because this was the formation adjacent to the cabin in the photo. I hiked out of the drainage to get a better vantage. Off in the distance I could see a band of rock that created a low cliff, similar to the one in the photograph. I continued hiking, senses heightened, and after a few more bends in the creek I looked up to a man-made structure. I had found the cabin, intact. 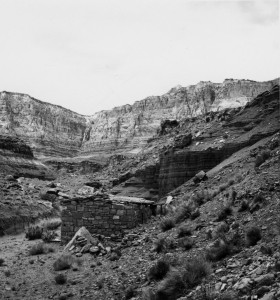 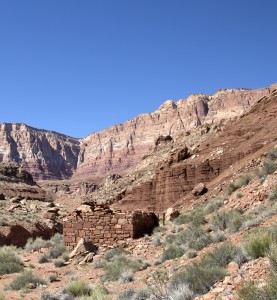 This first attempt at Soap Creek made me realize that the difficult part of this project is not recreating the photo; it is finding the location. Even with specific coordinates, finding the exact spot where the previous photographer was standing is not always easy, as I would find out with the next photo at Walnut Creek. 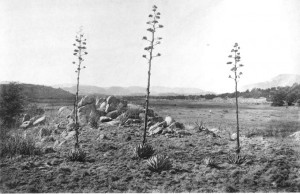 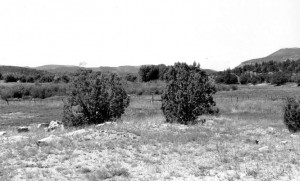 Repeat of Alexander Gardner’s photo taken in 1997 by Raymond M. Turner. Courtesy of US Forest Service. 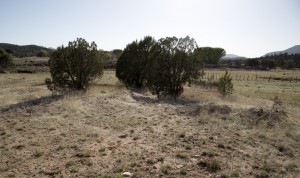 New challenges have presented themselves with each location. While driving down to the next re-shoot at Walnut Creek (West of Paulden) I encountered a slight “bump” in my plans while traveling across the rough back roads of Prescott National Forest.   The state had swapped public land for private land, blocking my direct route to Walnut Creek in Williamson Valley. My tattered and well-worn map of forest service roads throughout the state showed publicly owned, unpaved roads from Paulden to Williamson Valley. After a lengthy attempt at circumnavigating private ranches and gates with no trespassing signs I gave up and retraced the bumpy road back to highway 89. The detour took me south to Prescott and north again on Williamson Valley Road. It was frustrating being less than twenty miles from Walnut Creek but with no way to get through. The detour was scenic but it cut out hours of daylight. I was not too worried as the previous re-photographer had GPS coordinates of the reshoot location, rebar in the ground locating the site, as well as rock cairns. It was re-photographed in 1997 from the original in 1854. I expected this location to be easy. When I arrived I tracked down the GPS coordinates to within eight feet. I was perplexed as it was low in the creek bed with no view of the surrounding valley. I looked at the original photo and was reminded that the 1997 reshoot was only able to get an accurate GPS to within 100 meters. On paper that does not sound like a large area, but scanning a 100 meter circumference around my position turned into a search for a needle in a haystack. I searched for the piece of rebar and the rock cairn which was previously put in place to mark the reshoot site but found nothing, not even a cluster of rocks which looked like it could have been a cairn. During all of my pre-trip planning I never considered the need for a metal detector. Standing there, at that moment, that idea didn’t seem outlandish. The main dirt road looked recently re-graded and possibly widened and there was evidence of off-road vehicles in the area. This easy location was turning difficult. I referred to the photo and used the tangible topography to line up the photo. The distinct mountains in the background were easy to see, the barbed wire fence was still intact, and junipers were clustered in the foreground… A lot of junipers were clustered in the foreground! Attempting to line up the correct junipers to the mid-ground and background seemed more complicated than it should. Something was off. While walking around, trying to find an angle where everything would line up, I noticed numerous remains of mature junipers, cut down by chain saw. Progress may have interfered with a perfect replica, but it did lead me to an interesting discovery. While searching the vicinity for “the perfect shot” I stumbled upon the desiccated remains of several agave plants and stalks. In the original 1854 photo three agaves in bloom are in the center of the photo and numerous other agaves, ranging in age, dot the landscape. Looking more closely I found more remnants of agaves and even a very young one growing in between some boulders. It’s uncertain if these are the original agaves from the 1854 photo but being in the vicinity, they may be descendants of those in the photo. As daylight quickly dwindled, I photographed several slightly different angles but never found the precise spot. I was able to capture most of the key points in this re-shoot but the alignment is not completely correct. If I have enough time, I would love to go back out for another attempt. Now that I’m aware of the most direct route, it should be an “easy” second attempt. 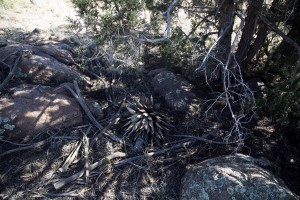 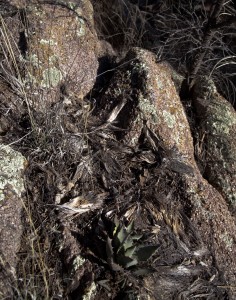 Young agave sprouting up between boulders and old agave fibers.

There are seven additional sites associated with the SEGA project that I am currently repeating using historic images; I look forward to sharing these with you very soon. This is continuing to be a great experience, learning new things every step of the way. I’m gaining deeper insight into the history of specific regions across northern Arizona, familiarizing myself with new terrain around the state, and grasping, first-hand, the exponential growth in vegetation over recent years. I have gained priceless experience in the field, valuable wisdom about coordinating a project from start to finish, and made important contacts while collaborating with other agencies like the National Forest Service, Sedona Heritage Museum, and The Museum of Northern Arizona. Working at the Special Collections and Archives at NAU has opened the door for me to gain knowledge and understanding of library science and databases, an integral skill in research which I was previously unaware of. I am beyond grateful to the SCA staff, the Hanks Scholarship, and NAU for creating this opportunity which has broadened my skill set in a number of different fields. I am confident this experience will benefit me greatly with future endeavors.