It’s that time of the year when all the hard work and studying is magically transformed into a diploma. Graduation weekend saw nearly 5,000 NAU students graduate beneath a light blanket of rain, snow, and hail. 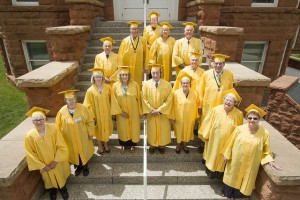 The 1965 Golden Graduates on the Steps of Old Main, May 9, 2015. Photo courtesy of David Slipher, Alumni Relations.

Graduation is also the time of year when Alumni Relations invites the Golden Graduates back to campus as special guests of the entire NAU community. The Golden Graduates received their diplomas 50 years ago! This year’s Golden Graduates (Class of 1965) are extra special, as they are the last graduating class of Arizona State College. 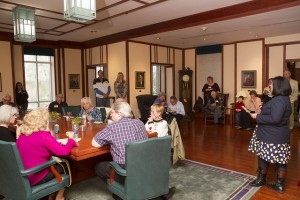 Special Collections pulled out many of its treasures from the 1965 era to share with the Golden Graduates. Included were letter sweaters, the copper ax, yearbooks, student handbooks, photographs of campus, homecoming dedicatee pins, beanies, and much more for the Golden Graduates to enjoy as they socialized and reminisced. 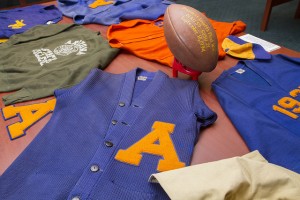 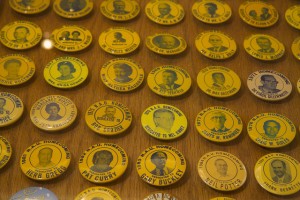 After Friday’s event, the Golden Graduates were the guests of honor at the 9:00am commencement exercises. They led the procession of soon-to-be graduates into the Skydome and had front row seats for the event. 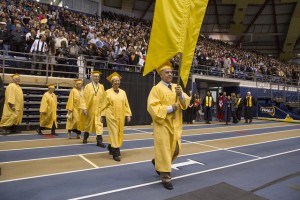 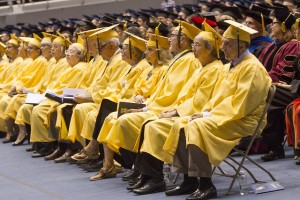 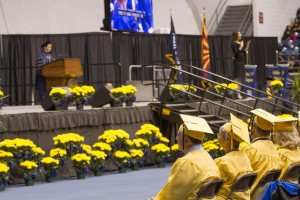 Following the ceremony, they were brought back to the library where they were treated to a delicious lunch in the Jean Collins Reading Room. During the lunch, each Golden Graduate was introduced and had an opportunity to share some of their memorable experiences with the group. We heard stories about the Latin Quarter, Axer’s Ally, skiing (and skiing accidents), trips to Oak Creek, the early days of the School of Forestry, life long friends (a foursome of ladies who met and have remained friends for over 50 years!), multiple generations of ASC/NAU graduates in families (one family – Mary Beth [’65] and Royce [’64] Moore have 17 ASC/NAU degrees in their family!), just to mention a few of the touching and fascinating stories shared among the group.  As you might imagine, many of the stories shared were humorous, entertaining, and quite often reflective of how ASC/NAU shaped the graduates lives. 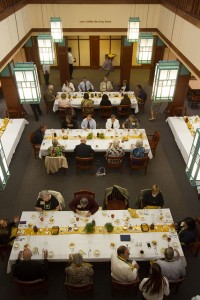 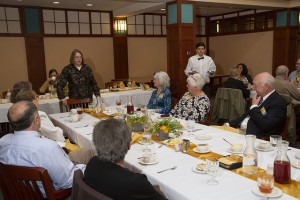 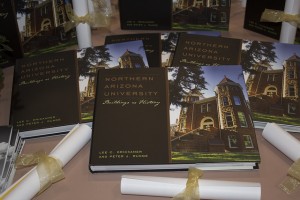 Gifts Given to the Golden Graduates during their Saturday Lunch. Photo courtesy of David Slipher, Alumni Relations.

This event is a developing tradition that we at the Cline Library and Special Collections and Archives as well as Alumni Relations look forward to and enjoy very much. The feedback from the Golden Graduates is equally positive and enthusiastic, so I’m quite certain this part of their weekend will continue to be part of the program.

From all of us at the Cline Library and Alumni Relations, we wish the Golden Graduates great happiness and a standing invitation to visit to the campus and library anytime they’re back in Flagstaff.