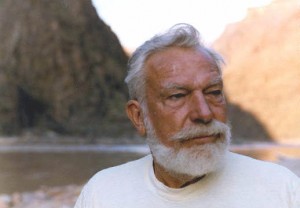 It is with great sadness that we learned of the passing of Martin Litton on November 30, 2014 at the age of 97. Martin Litton fit several lifetimes in his 97 years. He graduated from UCLA in 1938 with a degree in English and enlisted in the Navy during World War II, where he served as a pilot, flying glider planes. Following the war, he worked as a journalist for the Los Angeles Times in the 1940s and 1950s, writing on the subjects of travel and conservation.

It was through his writing on issues related to conservation at the Times that David Brower, director of the Sierra Club, first became acquainted with Martin. Brower and Litton became close friends, fellow Sierra Club members, and tireless crusaders who advocated for the protection of numerous beautiful natural resources in the United States, including the Redwood Creek (CA), Dinosaur National Park (AZ), Diablo Canyon (CA), and the Colorado River (AZ). 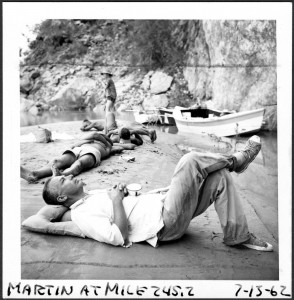 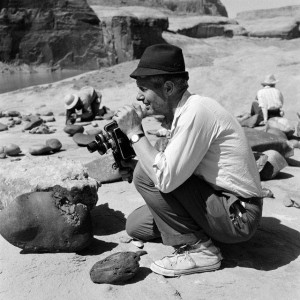 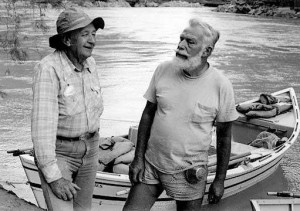 PT Reilly and Martin Litton, on the Colorado River, standing in front of a dory, 1984. Photo courtesy of the PT Reilly collection. 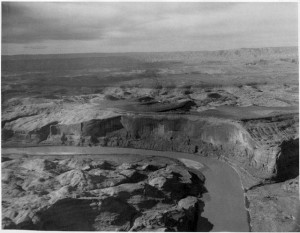 Litton may be best known for his environmental activism. Martin is closely associated with the fight to save Glen Canyon and the failed effort to prevent the construction of Glen Canyon Dam. David Brower, Edward Abbey, Katie Lee, and Litton fought fiercely and valiantly to raise awareness of and preserve the pristine beauty of Glen Canyon that would eventually be drowned and buried by the construction of the Glen Canyon Dam. Litton and Brower wrote a wonderful piece on the tragedy in the Sierra Club Bulletin titled, “Should We also Flood the Sistine Chapel so Tourists Can Get Nearer the Ceiling?” The construction of the Glen Canyon Dam and the lost of Glen of Canyon was a painful and deep blow to Brower, Litton, Abbey, and Lee, all of whom took the loss very personally. Although the effort to save Glen Canyon was unsuccessful, Litton and Brower were able to prevent two other dams from being built on the Colorado River (Bridge Canyon Dam and Marble Canyon Dam), which would have altered the landscape and natural beauty of Grand Canyon. 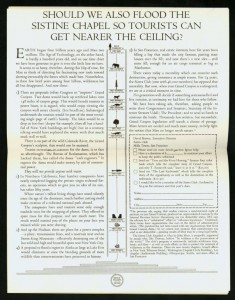 Although it’s too late to thank Martin for the work he did to preserve the natural areas that many of us enjoy today, the next time you find yourself in a protected wildness area, remember Martin and the others that made that experience possible.

Martin’s archival legacy is housed at the Cline Library Special Collections and Archives. His collection reflects his activities with Grand Canyon Dories, environmental activism, and advocacy, and his personal life. The finding aid for Martin’s collection can be found here on the Arizona Archives Online. Selections from Martin’s collection, such as images, oral histories, business records, and articles can be found here on the Cline Library’s Special Collections and Archives Colorado Plateau Archives.