The Doing of the Thing… 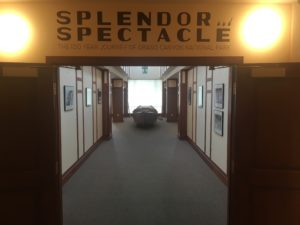 It’s that time of the year when SCA installs its annual exhibit. This year’s exhibit is titled “Splendor and Spectacle: The 100 Year Journey of the Grand Canyon National Park.” The past few weeks have been filled with excitement and a palpable buzz in the department as we being printing, matting, framing, and installing the pieces of the exhibit. This year, we’ve added a twist to our exhibits and we’re including two historic boats as part of the story. 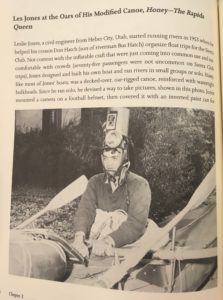 Leslie “Buckethead” Jones, sitting in his aluminum kayak with a Go Pro prototype 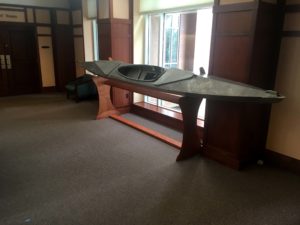 Les Jones’ hand built kayak. Yes, he actually took this down the Colorado River through the Grand Canyon!

Our good friends at the Grand Canyon National Park Museum (Kim and Colleen), were kind enough to loan us Leslie Jones’ 17’ aluminum kayak. For those of you unfamiliar with Les Jones, he was known on the river as “Buckethead Jones” and was the creator the Colorado River scroll map. Les built his aluminum kayak, running most rivers solo, and taking movies from a camera mounted on a football helmet, ergo “Buckethead.” By the early 1950s, Les began taping USGS maps together and filling in the missing contours. Les began using aerial photos, USGS maps and his own drawings and notes to trace and draw detailed maps on a scroll paper strips 7-10 inches wide. The maps were not waterproof and faded in sunlight, so they had to be protected from water and sunlight. Later his maps were copied onto waterproof mylar. Jones copied a river profile on the map above the river segments, labeling rapids and features on both. The maps contained rapid ratings, drawings of major rapids, Powell and other historic river camps, historic inscriptions and other detailed information. Les’ maps were some of the first maps to contain conservation messages. 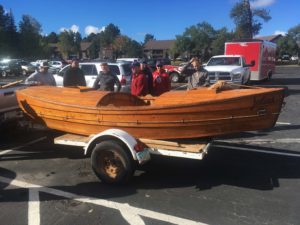 The stunning Julius, sitting on a trailer in the parking lot of the Cline Library

River runner, author, boat builder, oar maker, and historian Brad Dimock loaned us his replica of the Buzz Holmstrom’s historic Julius. In 1937 Buzz built his own boat and rowed it down the Green and Colorado rivers by himself! Buzz made the 1,100 mile journey in 52 days, running nearly every rapid. Although Buzz’s Julius F has long since been reclaimed by nature, Brad Dimock used historic photographs, his river running knowledge, and his extraordinary boat building skills to build a replica. Brad has rowed over 4,000 miles in the Julius since building it 2002. He kindly loaned us his Julius for our exhibit and now it sits comfortably in Special Collections and Archives.

The man…Buzz Holmstrom, sitting on the deck of the Julius 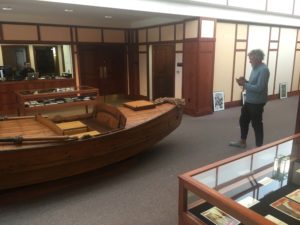 Brad contemplating the latest chapter of the Julius

Now getting the Julius into the library and Special Collections and Archives was a bit of a feat. The Julius weighs in at 476 pounds and I don’t care how many librarians and archivists there are in the library, there’s no way we were going to be able to get it up to the second floor. We called on our new friends, the Flagstaff Firemen Movers. Eight, very strong off-duty firemen showed up and moved the Julius from the library parking lot through the first floor of the library, up the circular staircase and into Special Collections and Archives in 21 minutes. These guys were amazing and I think they enjoyed moving a replica historic boat instead of a refrigerator or piano for a change. 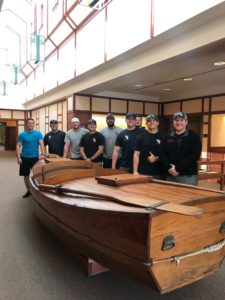 We want to thank Kim and Colleen at the Grand Canyon National Park Museum and Brad Dimock for loaning these two amazing historical boats for our “Splendor and Spectacle” exhibit. We want to also thank the Flagstaff Firemen Movers for helping us get the Julius in Special Collections and Archives (see you guys in 11 ½ months when we need to bring it back to Brad!).

“Splendor and Spectacle” will be open to the public on Monday, October 15 and will be installed through September 2019.