The fall semester is upon us! As students and faculty begin returning to campus, there’s an ambiance of excitement, apprehension, and hope that the upcoming year will be fruitful. For freshmen, it is the beginning of a new chapter of their lives. For seniors, it is the end of that chapter. 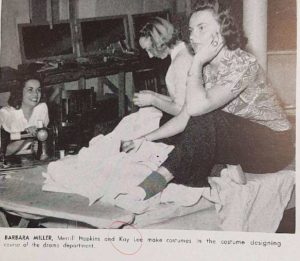 Katie Lee, who went by Kay in college, helps with costume design. Katie is in the forefront.

For the next installment of my work processing Katie Lee’s collection, I want to share some highlights of Katie’s attendance at the University of Arizona in Tucson. She graduated in 1943 with a Bachelor’s Degree in Fine Arts. In her collection are two University of Arizona yearbooks from 1941 and 1942. These are fun time capsules and provide insight into university life in the 1940’s, as well as the atmosphere surrounding World War II. 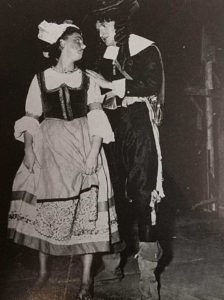 Katie is shown here as a peasant girl in “Don Juan.”

Highlights from the yearbook include the fashions of the year for men and women, sports, clubs, and extracurricular events. Katie is featured in the pages describing the Drama Department, where she is both assisting with plays and participating in them, and in the Wings Club, where she is pictured learning about airplanes. 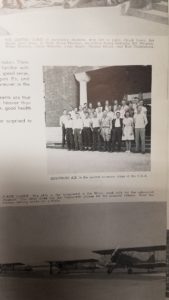 Katie was part of Wings while at the University of Arizona where she learned about airplanes.

Katie Lee was born in 1919. She grew up in Tucson and attended the University of Arizona. After her career as an actress in Hollywood and a singer, she settled in Jerome, Arizona. Her deep love of Glen Canyon and the hatred of the dam there led her to become an avid advocate for its destruction. Katie continued to sing, write, and advocate into her older years. She passed away peacefully in 2017.