Special Collections and Archives’ Delia Muñoz was a featured presenter on two separate occasions when Javier Vallaure–Spain’s Consul General in Los Angeles–came to Flagstaff/NAU on April 3. Vallaure was in town to learn more about the history of the Spanish presence in Flagstaff. His full-day visit took him to the Southside’s historic Basque “fronton” ballcourt, followed by an open discussion (featuring presentations) on the presence of Spain in the Southwest at NAU’s Health and Learning Center building. 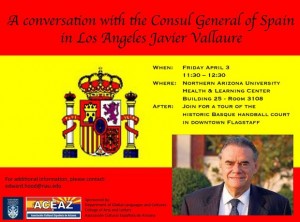 Delia began her day with an introduction to the Spanish and Basque people she has interviewed over the last 18+ years. She focused on two individuals (Margarita Martinez de Gomez, Victor Alonso) and shared their migration stories (including photos) with a captive audience of over thirty NAU students, staff, faculty, and community members. Vallaure spoke extensively about his experiences as a Consul General, in addition to sharing some family history. Coincidentally, his father was an ambassador; he met several dignitaries over the decades including former President Richard Nixon and former British Prime Minister Margaret Thatcher. Audience members asked Vallaure about how he became interested in this line of work and what sort of education and skills he acquired in the process. 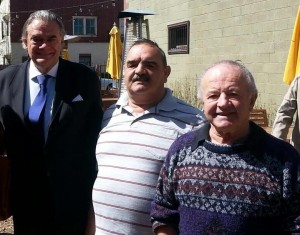 In the afternoon, Delia and a small audience (including Vallaure) met just outside Flagstaff’s Tinderbox restaurant (34 S San Francisco St), which is located just in front of the Basque “fronton” ballcourt. Delia spoke of the history of the ballcourt, and made a point to highlight some aspects of its history that went beyond information currently provided in a descriptive historic sign nearby. Delia spoke of how Basque and Castilian sheepherders filled the boarding house next door alongside others who spoke the same language and shared the same customs. The Basque also reinforced cultural continuity and social customs, such as the game of pelota. Pelota is a form of handball that is played in a court called a “fronton.” At this time, the city is exploring an update to the sign to more accurately reflect its significance to the Spanish and Basque people. 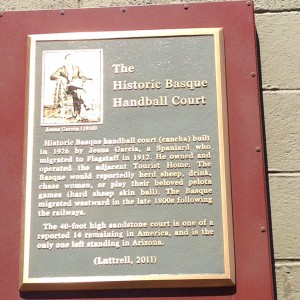