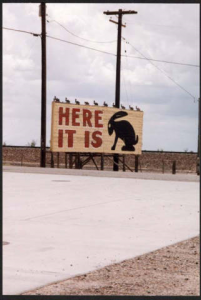 Technically, summer is over, and winter is coming. In the short span we call “fall” here, is when we change over from the past exhibit to the current one. Such change almost always makes us  here at Cline Library, Special Collections and Archives (SCA) think of exhibits past. Sometimes with fond memories!

My memory today revolves around our first “social media” experiment at promoting an exhibit- in this case the 2009 “Route 66 in Arizona: Don’t Forget Winona!” exhibit. We developed a plan to have (beyond the de rigueur exhibit web site) a blog and a Flickr page that would support the exhibit. The rationale being that we could reach out to people interested in Route 66   and promote the exhibit; and through Flickr, we could give folks a place to post photos that they felt graphically  defined Route 66 in Arizona.

Although the blog wasn’t as successful as we had hoped for as a venue for folks to discuss higher-order Route 66 topics, the Flickr site ponied up a few hundred images by the time the exhibit ended and continued to grow at a constant, if not slow pace thereafter.

Five years later, the “Route 66 in Arizona: Don’t Forget Winona!” Flickr site now has nearly 2,800 shared images, and more than 130 members with submissions arriving almost daily. In August it seemed high time to sit down and do the analysis we hoped would be possible: use the Flickr images to see what people think graphically defines Route 66 in Arizona.

Given the success of the Flickr page, we reviewed over 2,000 images for place and content, allowing for up to two “subjects” per picture. We defined 33 separate geographic locations for Route 66 in Arizona, spanning the state from end to end. “Subjects” were broken down into categories: Roadside Architecture (then further to Signs, Stores, Motels/Hotels, Restaurants, etc.), Transportation (Automobiles, Trucks, Railroads, Planes, etc.), Landscape, Roads, People, Street Scenes, Animals and Food.

The geographic results showed that while every site (or place name) had at least one image, overwhelmingly the western locations in Arizona out-numbered those from the east; and not surprisingly Seligman was the one place name with the greatest number of images – 304 out of 1,250 identifiable locations. Other popular sites included Kingman with 115 images, Williams with 100, and Holbrook with 85. The largest subject category was roadside architecture with 893 images, followed by landscapes at 197, and transportation with 132.

Within the roadside architecture subject category, signs represented the overwhelming majority with 386 images, while motels/hotels and restaurants/cafes each having 105 images contributed to the site.

Thus- signs, especially those in Seligman would seem to typify what many of our 135 photographer friends consider to be definitive of Route 66 images/iconography. I promise a more in-depth review of our data, and perhaps some commentary from our Flickr friends later this year in some semi-respectable online location. Watch this space.

Meanwhile- enjoy our online Route 66 exhibit , and view the attendant Flickr site -many of these images are simply fantastic.

Today our endeavors into “social media” continue to expand. We are contributors to Historypin, a digital, user-generated archive of historical photos, videos, audio recordings and personal recollections; we’ve contributed content from three of our collections that highlighting the Colorado River and Route 66 (http://www.historypin.com/uid53522/channels/view/53522/#!photos/list/ ).  Building on the success of social media associated with our exhibits, SCA is exploring the use of QR codes and #hashtags  with the John Running Exhibit “Offerings to the Gods of Light and Shadow“, which opened to the public on Friday, October 17, 2014.

Despite the wonderful images you can find via social media venues we contribute to and are recipients of via Flickr, please know that there are over 10 million items in the Cline Library Special Collections and Archives. We have over 2000 images from 12 different photographic collections of documenting Route 66,  the various alignments of the Mother Road from Kansas to California, from as early as the 1920s to present. View them at our digital archives, and be sure to enjoy a trip down Route 66 – or your favorite “blue highway”. Hey…and don’t forget to send  images of your travels on Route 66 to our Flickr page!