In the lead-up to Halloween, SCA staff thought it would be fun to highlight Halloween as articulated through NAU’s student newspaper, The Pine and The Lumberjack.  We have chosen to highlight just one issue per decade (as available), but there are over 300 individual issues of the newspaper that mention ‘Halloween’ in some capacity. Due to the hard work of many folks, the first 100 years of the student newspaper is now available (and searchable!) through the SCA site. Check out the newspaper in its entirety here. 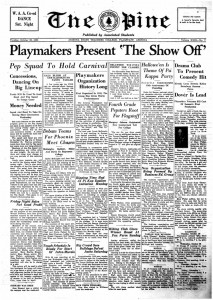 “Delta Psi Kappa, national physi­cal education sorority, entertained the patronesses, alumni and the women majors and minors in phy­sical education at an appropriate Founder’s day party Monday eve­ning, in Morton hall parlor. Dorothy Harrington, chaplain, assisted by the active and alumni members commemorated the found­ing of the sorority 19 years ago, in the national service. A Halloween party, with games, stunts and noisemakers followed and refreshments were served.” 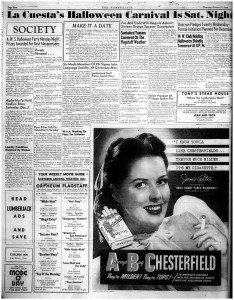 “American Women Students have announced their annual Hallowe’en house party will be held Monday night, Oct. 31 at 10 p.m. This party, for women only, will be held in Morton Hall basement. Prizes will be awarded for the best disguised, the funniest, the prettiest, and the most original masqueraders.” 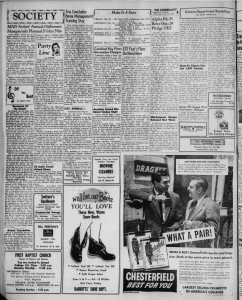 “Those fanatic artists are at it again! Members of the Mu Alpha Delta, campus art club, are plan­ning the annual Halloween Ball, Friday, Oct. 29, in the women’s gymnasium at 9 p.m. Heading the decorations committee is John Davidson. He and his fellow workers have planned the traditional pallets holding can­dles for the tables, a huge mobile to hang in the center of the gym, and of course the classic versions of ghosts, goblins and jack-o-lanterns.” 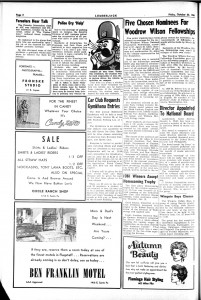 “The first annual Halloween Gymkhana will be held a week from Sunday, October 29, at the ASC Stadium Parking Lot, at 1 p.m. The Gymkhana is an automobile obstacle race sponsored by the ASC Sports Car Club. There will be three classes consisting of American Cars, Economy Compact, and Sports Cars.” 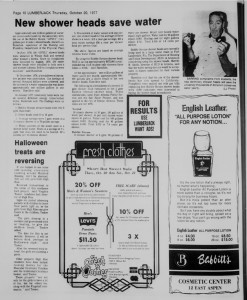 “If you happen to see some odd-looking creatures roaming around Married Housing, don’t be alarmed. They are only girls from High Rise.  Reversed trick-or-treat is the name of this residence hall project said Virginia Tooker, residence hall director of High Rise.” 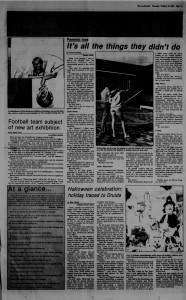 “An all campus Halloween bash at South Activity Center will kick off the festivities with dancing, a disc jockey, munchies, costume con­tests and prizes from 9 p.m. to mid­night Friday and is free for those dressed in costume. SAC, Sechrist, High Rise, Tinsley and Cowden are sponsoring the event.” 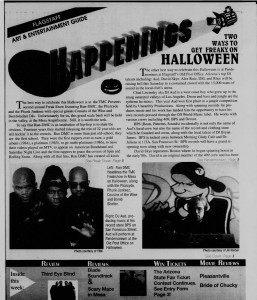 “The other way to celebrate this Halloween is at Pandemonium at Flagstaff’s Old Post Office. Arizona’s top DJ talents include: Aud, David Skye, Alex Ruiz, DSL and Rhee will be raising hell this Saturday to a costumed crowd with the 15,000 watts of sound in the local club’s arena.” 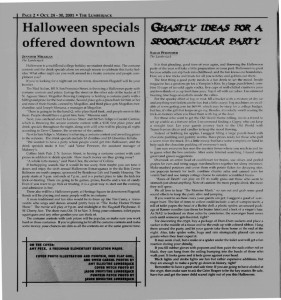 “If you want to see how crazy your guests can get, I suggest a good ol’ scavenger hunt. The list of items to collect could include: a set of vampire teeth, a roll of toilet paper, the head of a Barbie doll, a plastic spider, an unused pack­age of Ramen noodles (use them for brains later) and a lock of a virgin’s hair. As NAU is bordered on three sides by cemeteries, the scavenger hunt never ends until someone gets haunted, right?” 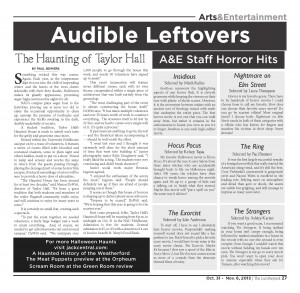 “A student tradition, Taylor Hall’s Haunted House is ready to satisfy one’s taste for the grisly and gruesome once more. Hosted within the University Fieldhouse and put on by a team of volunteers, it features a series of rooms filled with bloodied and costumed students, some in plain sight and others hidden, ready to put on a show. Poised to jump and scream and receive the same in return from the guests passing through, playing the deranged part of some horror film escapee, this lurid assemblage of actors will be sure to provide a heavy dose of adrenaline.”