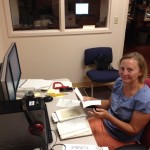 I’m excited to be the Reilly Intern at the Cline Library. My family and I arrived in Flagstaff a week ago after bicycling from Ann Arbor, Michigan–where I’m a Masters student at the School of Information–to Colorado. We drove the rest of the way. 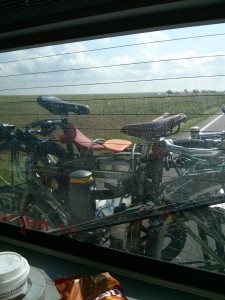 Heading to Flagstaff with our bicycles in tow. Photo courtesy of Cinda Nofziger.

The trip was challenging, but it was also a great experience for all of us. Jackson, nearly three, alternated riding in the “front seat” of Dad’s bike, in the trailer, or occasionally on his bike if we were on a trail. 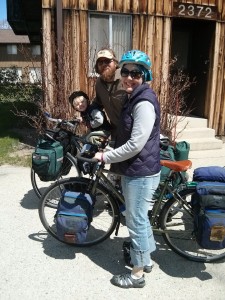 All smiles, as we prepare to start our journey, 2014. Photo courtesy of Cinda Nofziger. 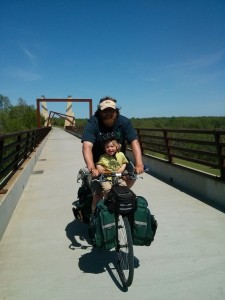 Brad and Jackson merrily riding across a bridge, 2014. Photo courtesy of Cinda Nofziger. 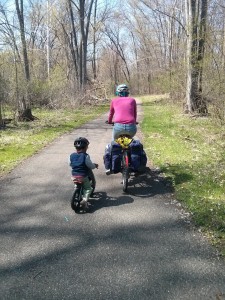 He had a great attitude most of the time. And he always had lots of energy at the end of the day—when my husband and I were most worn out. We saw lots of small (and some large) Midwestern towns, battled hills, wind, and some initial cold weather. Cars on the road were more or less aware (sometimes much, much less) and considerate of our presence beside them. We camped the majority of the nights, sometimes in state parks, sometimes in city parks. Jackson climbed, slid, and swung on countless playgrounds.  We met some kind and generous folks along the way who offered us water and snacks, fed us breakfast, or bought our dinner. Jackson got lots of free ice cream! Overall, it was an amazing trip. I feel lucky and grateful that I had the chance to do it.

The bike tour was a great start to what I’m sure will be a great time in Flagstaff and at the Cline. This week, I’ve begun planning Special Collections and Archives’ 2014 exhibit showcasing John Running, freelance photographer from Flagstaff. To get inspired for the exhibit design, I’ve been listening to John Running’s oral history interview with Jonathan Pringle and Jess Vogelsang. Running has had an amazing life; for over forty years, he’s traveled and photographed around the Southwest, the United States and internationally, in Trinidad, Palestine, Mexico and Scotland. I’m eager to delve into representing his life and work in the exhibit. As a photographer of people, Running believes making a portrait is a gift; as a documentarian, he believes one must “try to photograph the truth and present it honestly.” He approaches his subjects with humility, grace, and kindness, which come through in his images.  I was pleased to meet him in person and found him to be just as kind and gracious in person. He’s also a great story-teller. I will work to infuse his approach to photography into this exhibit.

I’ve only had time to scratch the surface of his collection, but here are a few of my favorites so far… 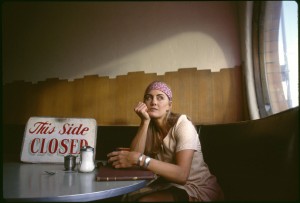 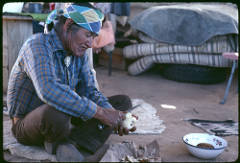 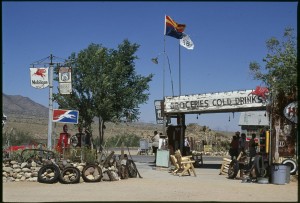 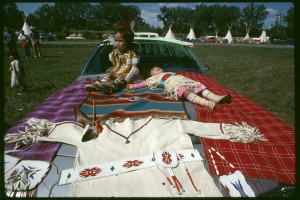 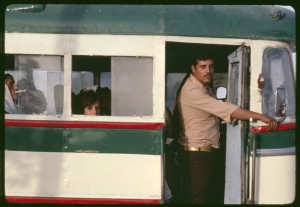 I’m really honored to be here working on this project and am thrilled to be in Flagstaff. I look forward to exploring the city and surroundings, as well as learning more about Running’s life, career, and photographs.