Graduation is a time for celebration and reflection. This past weekend NAU celebrated the Class of 2014 graduation, which included over 4000 students. 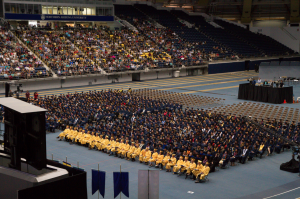 Friday, May 9, 2014 commencement at the Skydome on the campus of Northern Arizona University. Photo: Alumni Relations, David Slipher 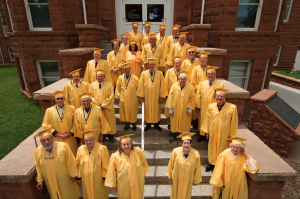 The Golden Grads on the steps of Old Main. Class of 1964 from Arizona State College. Photo: Alumni Relations, David Slipher

Twenty-seven Golden Graduates (and their guests) joined us after the Friday afternoon graduation ceremony for a tour of the “new” library (their library was in the Gammage building) and Special Collections and Archives, followed by a dinner in the Special Collections and Archives Miriam Lemont Reading Room. The Golden Graduates received gifts from Alumni Relations that included a copy of Northern Arizona University: Buildings as History and copy of their commencement programs. After dinner, the Golden Graduates had a chance to share memories from their time at Arizona State College (ASC became NAU in 1966). 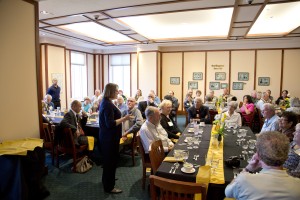 Many stories were shared. Some of our favorites involved late night panty raids, the meeting of spouses, football practice with Coach Max Spillsbury, band practice in the snow, inquiries about Althea Ragsdale (the Gammage Library librarian), 50th wedding anniversaries that we being celebrated concurrently, and the general sense that Arizona State College was instrumental in the development of everyone in attendance. Several of the graduates shared that their children were also graduates of NAU. One special guest, Loya (Bryant) Nolan (class of 1941), was in attendance with her daughter, Kathleen (Nolan) McWhorter (class of 1964). It was an honor to meet them both. 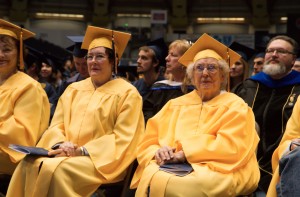 During the tour of Special Collections and Archives, the Golden Grads were shown two new collections that are available via the digital archives: Louie’s Legacy and Pine/Lumberjack newspaper digitization project. Louie’s Legacy (http://library.nau.edu/speccoll/exhibits/louies_legacy/index.html) is a repeat photography project documenting history of North Campus buildings. This past year, Special Collections and Archives digitized all the extent copies of the student newspaper – The Pine (1914-1946) and Lumberjack (1946-present). The paper will be available to via the Colorado Plateau Archives (http://archive.library.nau.edu ) the public by late summer.

It was a wonderful evening and a reminder of how significant the time spent at NAU is to those who attend. On behalf of the Cline Library and Special Collections and Archives, we would like to congratulate the graduates from both classes – 2014 and 1964 – and wish them the best of luck and continued success.